The Professional’s shop stocks a wide variety of equipment and accessories from major brands such as PING, Yonex, Titleist, FootJoy, ProQuip, Motocaddy and PowaKaddy alongside Glenbrae knitwear, PING Collection and ladies Green Lamb clothing. As an authorised PING Club Fitter and providing a fast efficient club repair service, we can ensure your equipment is best suited to your game and in the best condition for your golf. 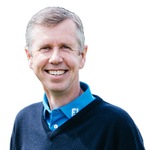 Andy Clapp - head professional
I joined Brickendon Grange as the Head Professional back in May 2008 and I have been a qualified member of the Professionals Golfers Association since 1992. I was fortunate enough to have been a former European Tour player and I completed all four rounds in the 127th Open Championship at Royal Birkdale in 1998. I have been the Hertfordshire Professional Champion on two occasions in 2005 and 2007 and PGA of England (East) Club Professional Champion in 2009.
My main focus now is on my role here at the club and since 2011 I have been running the golf operations as well as my other duties as club professional.
As well as coaching at the club, I am actively involved with the development of Junior golf within the county and I'm currently the Hertfordshire Golf Union boys under 18 lead coach. As Captain of the Hertfordshire PGA in 2007 I am now chairman of this committee. I also represent the county on the PGA of England (East) committee and in 2011 and had the honour of being Captain.
Book a Lesson Book a Club Fitting

Given the choice, what would you rather be?

Here are the current poll results

The onset of the Coronavirus pandemic has touched us all. Due to the Government's latest announcement, we have closed the pro shop until further notice. We hope to be back soon.
In the meantime, please enjoy browsing our website where you'll find the latest product reviews, fun challenges to try at home and plenty more.
Please stay safe and take great care of yourselves and your loved ones.

Thank you for signing up.

One last step - You will receive an email from us in the next few minutes. Please click the link to confirm you are happy to receive our weekly newsletter.